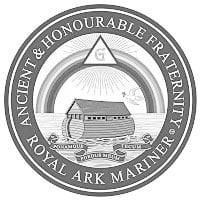 Royal Ark Mariner is a completely separate degree, administered by the Mark Grand Master, for which candidates and must already be Mark Master Masons.

Its precise origin is unknown Its earliest-known workings as a degree were in various places in the 1790s. However, there are earlier documents that refer to Noah in a masonic context, and even an unconfirmed eighteenth century “Grand Lodge of Ark Mariners”.

The degree’s ceremony of elevation equates the admission of the candidate to Noah’s progress to salvation through employing his skills and labour in building the Ark which carries him and his family to the haven of rest.

It is often suggested that masonic rituals originated in the mystery plays of the medieval Guilds. Like “recognised” masonic ritual, these plays often included moral and spiritual teachings. The story of the Flood and the salvation of Noah was certainly one such theme, so is very likely to be a source for the Royal Ark Mariner degree and ritual, and is clearly represented in the use of the rainbow and dove with olive branch in the Jewel.

There are obvious parallels between Noah, the biblical builder of the Ark, and Hiram Abif, the legendary architect / chief builder of the first Temple. It is also notable that Tubalcain – the “first artificer in metals” was not a contemporary of Hiram or Solomon, but the half-brother of Noah.

Early eighteenth-century Masonic documents even suggest a legend that Noah’s sons sought the secrets of their dead father’s secrets, paralleling the Third Degree legend of the death of Hiram. It is not surprising, therefore, that early masons may well have regarded Noah as an original Grand Master – a precurser (in ritual stories) of Hiram.