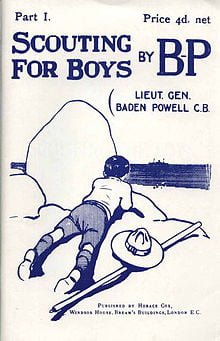 Front cover of the first part of Scouting for Boys by Robert Baden-Powell, published in January 1908. Illustrations by Baden-Powell himself. Printed by Horace Cox, printer to Cyril Arthur Pearson. see Wikipedia – Scouting for boys

The Alfreton Hall Committee is pleased to announce that the Scouting Lodge of Derbyshire will now hold most of its meetings at Alfreton, with one meeting held at Drum Hill

The name of the Lodge was suggested by W Bro. Dennis Cooper. In “Scoutng for Boys”, part 3, published 12th February 1908 (Camp Fire Yarn No. 11), Baden-Powell wrote that, “Pioneers are men who go on ahead to open the way … for those coming after them.”

W Bro. Clive Bemrose, a former County Commissioner for the Scout County of Derbyshire and a Past Master of Tyrian Lodge No. 253, the oldest Lodge in the Province, arranged that Tyrian Lodge would sponsor the new Lodge.

Due to the principles inculcated in scouting, which in many ways parallel those in Masonry, many Scouters gravitate towards freemasonry. The parallels are easily found and in fact, nothing can be found in the Scout Law and Promise that is not found in Masonry.

We are proud that Pioneer Lodge has become part of the Alfreton Masonic Family and we look forward to both working with them and supporting them over the coming years.

If you would like to become a member of this Lodge, then please complete the form below, and someone will be intouch to talk to you further.

The Lodge is also very progressive, and in its spirit of scouting you can Follow them on Twitter @pioneer9065