Alfreton Masonic Temple was originally built as a library in 1938 by an American Philanthropist named Robert Watchorn who was born in Alfreton and emigrated to the USA in his early teens. He made his fortune before returning to England and in the 1930’s he bought up and demolished the row of back to back miner’s houses where he was born. He then built the Watchorn Methodist Church, a substantial number of houses, and the Abraham Lincoln Library as an educational facility for Alfreton. 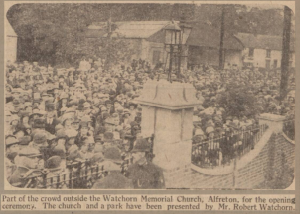 During the 1939/45 war the library was taken over as an Army Hospital by the government and after the war, it was used by the National Health Service as an insurance office for the distribution of coupons, ration cards etc.

The building stood empty for a few years until 1970 when it was purchased from the Robert Watchorn Trust by Alfreton Masonic Hall Ltd, in which the Royal Alfred Lodge 1028 and the Vulcan Lodge No. 4382 were instrumental in bringing this about. The ceremony of dedication of the new Temple took place on the 2nd November 1970, the Dedicating Officer being the Provincial Grand Master, aided by his team of Provincial Officers.

To all intents and purposes, the Hall consists of the Lodge Room, robing areas, toilet facilities and a Dining Room in Bar Facilities.

There is a substantial car park that should accommodate all vehicles for any occasion or event.

Find a list of Hotels near the lodge below